Home Who we are What is a Secular Institute? Our Aims Lay Carmelite Spirituality What is a vocation? Training Vows Our story Our saints Prayer of the Carmelite Family The Flos Carmeli Gallery Links Contact

The fact that the Leaven still exists is a remarkable story. It is a story of challenges, courage, difficulties and daring to change amidst opposition, of prayer, discernment and love of Carmel.

The story began in 1949 when Fr Malachy Lynch became acquainted with the Swingler family. Fr Malachy was planning to found a Secular Institute, although this vocation was little known or understood. Frieda, and her sister Joan, became increasingly interested in what Fr Malachy told them and decided to offer themselves to God in this way.

Whilst there they began to think, to ponder, to pray and to have doubts. In the Castle, as at Aylesford, they wore a habit. They said Divine Office together. They were living not as a Secular Institute should, but as a religious community. In 1958 they decided to leave the Castle and go out into the world. It was a traumatic decision. Many members left. Fr Malachy was against the decision. Things looked very bleak.

The difficulties were immense and at times it was doubtful whether the Institute would survive. They moved from the castle to a house. Several members went out and resumed their occupations, but they still had a chapel and wore the habit in the house. They re-assessed and moved to a smaller house with no chapel and no habits. Then they discerned that they should be going out into the world living and earning as members of a Secular Institute should. Their habits were refashioned into suits for work!

During the years 1963 – 71 there were only 5 professed members. They thought of joining another Secular Institute, and indeed made overtures, but their love of Carmel was so great that they decided to soldier on. Despite fears the Institute has continued to grow. How completely dedicated those 5 members were!

The Leaven is continuing to transform through prayer and discernment. The simplicity of the Rule of St Albert allows many different flowers to grow in God’s Garden – some large, some small, some insignificant on their own. But each is important in creating a beautiful ‘whole’.

Are you ready to be a pioneer? 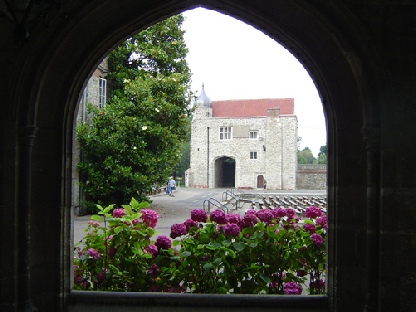 The Gatehouse - Our first home.